Popular on IC: NAR: Existing-Home Sales Decreased to 5.80 million in May...

Hotels: Occupancy Rate Down 17% Compared to Same Week in 2019

Note: The year-over-year occupancy comparisons are easy, since occupancy declined sharply at the onset of the pandemic. However, occupancy is still down significantly from normal levels.

U.S. hotel occupancy remained relatively flat compared with the previous week, according to STR‘s latest data through May 1.

While the overall weekly data was stagnant, weekend occupancy rose modestly and came in above 70% for the fourth straight week. However, the Top 25 Markets showed a lower occupancy level in aggregate with more properties reopening on top of lower demand.
emphasis added 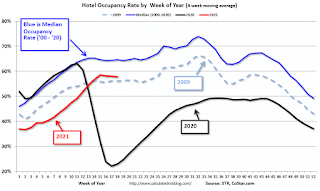 Occupancy is now slightly above the horrible 2009 levels.