New home sales for January were reported at 923,000 on a seasonally adjusted annual rate basis (SAAR). Sales for the previous three months were revised up.

This was well above consensus expectations for January. Clearly low mortgages rates, low existing home supply, and favorable demographics (something I wrote about many times over the last decade) have boosted sales.  A surging stock market has probably helped new home sales too.

Another factor in the strong headline sales rate, over the second half of 2020, was the delay in the selling season.   Usually the strongest sales are in the March to June time frame, but last year the strongest sales months were later in the year - so the usual seasonal factors boosted sales in late Summer, Fall in 2020. 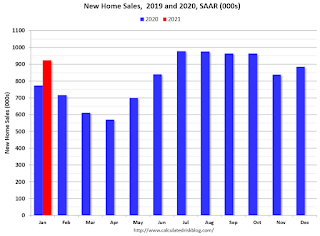 The year-over-year comparisons are easy in early 2021 - especially in March and April.

However, sales will likely be down year-over-year in August through October - since the selling season was delayed in 2020.

And on inventory: note that completed inventory is near record lows, but inventory under construction has closer to normal. 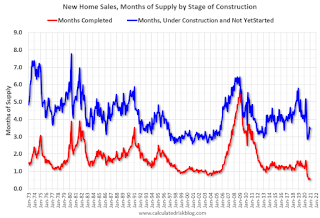 On inventory, according to the Census Bureau:

"A house is considered for sale when a permit to build has been issued in permit-issuing places or work has begun on the footings or foundation in nonpermit areas and a sales contract has not been signed nor a deposit accepted."

Starting in 1973 the Census Bureau broke this down into three categories: Not Started, Under Construction, and Completed.

This graph shows the months of supply by stage of construction..

The inventory of new homes under construction, and not started, is about 3.5 months - just a little below normal.